bass player, born in Vicenza on March the 16th 1957, he lives in Lucca since 1961.
With no doubts one of the milestones of Lucca's music scene, he has been involved in several Italian tours and productions. He is a musician by a very personal print with refine tasty lines by the smooth sound of his fretless bass.
Self taught musician, by the age of 10 already performing as amateur on classical guitar and by 17 part of some Latin American and folk bands of the area. At the age of 20 he starts playing the electric bass and forms a jazz fusion band inspired by the great Jaco Pastorious.
By the time he cooperated as "session man" in jazz, rock, blues productions and joined a group called "MEDITERRANEO", with this concept he participated to a great number of festivals abroad and in Italy here we could mention "FOLKEST" in Friuli where he performed on 5 consecutive years, one of those beside singer Joan Baez.
With "Mediterraneo" has been part of the compilation "Canti Randagi" by Ricordi publishing: an anthology of Fabrizio de André's compositions with a track by poet Cecco Angiolieri from Tuscany "Se Fossi Foco",
Lately he recorded two albums with groups "Canto Lunare" and "Dune" two production by ethnic - new age flavor.
Antonello, among, Link XII, is working on a project of Mediterranean sounds by jazz harmonies, Latin rhythms and south Italian melodies. 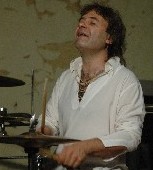 Educated drummer on "Percussioni Sinfoniche" at the Cherubini Academy of Music in Florence - Italy.
Michele started touring as a modern drummer with the great of Italian Jazz like: C. Fasoli, F. D'Andrea, G. Azzolini etc.
In 1983 he forms his own band including bass player Geppy Frattali and tours around Italy, later on he his part of the famous Tours of Zucchero in 1986-87-88 playing with artists like: Joe Coker,Salomon Burke, Lisa Hunt, Memphis Horn,
From 1990 to 1993 he plays for Rai and Media set productions playing for Claudio Baglioni, Eros Ramazzotti, Antonello Venditti, Irene Grandi, Riccardo Cocciante, Gino Paoli and Gianni Morandi.
From 1995 he started cooperating with guitarist Vincenzo Bramanti forming "City Garden" touring all over Italy and this cooperation has been the link to Antonello Solinas and Enrico Rosa in the the creation of Link XII. Born in Pietrasanta (Lucca) November the 2nd 1972, son of art, at a very young age he starts his musical activity as a guitarist pointing his studies to Jazz - Rock and Funk.
He attends to the academy CPM in Milan following the lead of Maurizio Colonna and Franco Mussida.
From 1998 to 2000 he is part of X-JAM band, here he composes the track of the record WAKE UP and participates to several rock - blues Festivals in Italy and abroad.
At the same time both in Trio and Quartet he is part of an experimental music project with his band City Garden from 1995, with this group he experiments with very original arrangements of music by Police , Stivie Wonder, Prince, Herbie Hancock and Miles Davis.
Vincenzo is as well involved in soul, pop, and funky productions with international artists as Tullio De Piscopo,Tony Esposito,Rossana Casale, Elisa, L'Aura, Danna Leese Routh among others. He is member of the band on Television productions like: Direct Rai 1 with Tullio de Piscopo in 2000,"Insabbiati" Rai 2 in 2004 directed by Barbara Chiappini and Fabrizio Rocca.
In 2005 he meets Enrico Rosa and immediately a mutual musical understanding takes place between them and they give birth to Link XII.
During the last years Vincenzo Bramanti has been teaching guitar at the Modern Academy Pentagramma in Pisa. Since 2006 he is the guitarist used on the productions by the mythical Mina.

Born in Leghorn - Italy on September the 18th 1951.
He is an extremely versatile guitar virtuoso always exploring in music. Session man, composer and arranger, in Italy since 1971. In 1973 he created a Symphonic Rock Album,"Campo di Marte", which today is a milestone of the Italian progressive rock. In Italy, from 1972 to 1978 guitarist for Gianni and Marcella Bella,Checco dei Giganti as well as on several productions by CBS and UA working in studios and concerts with Ares Tavolazzi, Giulio Capiozzo, Demetrio Stratos, Tullio De Piscopo, etc. At the end of the 70s he moved to Denmark and started solo concerts by classical guitar, playing fusion between classical music and Jazz using his own right-hand technique, developed in the 60s, combining plectrum and finger picking. Enrico has performed in the Jazz field solo and with the cream of the Scandinavian and American Jazz based in Denmark. Among other things in concert with big band and rock singer Jette Torp as well as The Odense Symphony Orchestra with Sarah Brightman and the recording of Ron Goodwin film scores.
In 2002 ROSÆ - "Classico Atipico", with his wife Eva on recorder ,where he wrote the guitar part for music by Händel and Vivaldi, also Enrico's compositions are part of this album. In October 2002, in Boston (USA), Enrico Rosa and pianist Ferdinando Argenti ( Chet Baker pianist) recorded a Jazz album "To the old Friendship" with original compositions including Eva Rosa on recorder as guest soloist on two tracks.In 2003 Campo di Marte again in concert at "On the Road" Pelago (Italy) recording Live "Concerto Zero". In 2006 a chamber prog CD with ROSÆ - "The Incredible Journey" and in Italy a jazz CD with Link XII - Back Home. October 2009 back to Boston USA with a new project with Ferdinando Argenti: "Boston Gig" released september 2010.

Enrico Rosa has been teaching on Conservatories and other Musical Institutes since 1979 and has been a part of the creation of the Conservatory of Jazz/Funk/Rock in Denmark as well as the complementary music education.