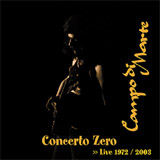 Campo di Marte, for the first time together after 30 years,

at the festival "On the road "

A Live production has been recorded at La Terrazza (Ronta /Firenze).

Here is how we recorded:

Bass, acoustic and electric guitar, keyboards and wind controller are recorded plugging directly in the mixer ,through line drivers(guitar using GT5 processor), while the alto, renaissance soprano and bas recorder are taken acoustic by microphones as well as drums, percussion and vocal.
All instruments are played while all musicians are performing to preserve the authenticity of the music.

The live studio recording as been done in one take as a Live concert, recorded by Sergio Salaorni of Larione 10, then mixed in Denmark at Crocodile Inn, Kolding.

Produced by Enrico Rosa with the great help of Torben Schmidt as Assistant Producer.

1) Primo tempo / Settimo tempo
This track is a new arrangement by Enrico Rosa combining some parts of 1973 Primo tempo and Settimo tempo in a way to have more immediate impact on the audience.
Eva plays on Digital Wind controller at the start then changes to Alto Recorder in the middle part returning to the wind controller at the end.
Sass plays the Organ part on the Synthesizer and switches to Horns part in the middle then back to Organ.
Mauro is on Drums
Maurilio on Bass
Enrico on the Electric Guitar
This is one of the two tunes with a short vocal part in which lyrics picture the absurd damage done to mankind from mankind by the use of war.

2) Back in Time
This tune starts with Enrico on Acoustic Guitar and Sass on Strings part soon followed by Eva on Renaissance Soprano recorder, changing suddenly mood and only the Recorder and Guitar continues on the new theme supported by Percussion created by an ashtray filled with screws (by Maurilio), the back of an acoustic guitar (by Mauro) and an hand clap (by Sass)

3) Bluesy Rocky
Continues on the ending of Back in Time with Sass grooving in 6/8 on the organ then the Bass (Maurilio) comes in and Mauro on Rattle Bag and Drums then the Electric Guitar, that Enrico have changed to, moves in with harmonics and tremolo leading to the interlude (start and end of the tune) where Eva joins in on the Bass Recorder.
The melody is played by the Electric Guitar and on the second part of it the Bass Recorder plays a backing on the harmony.
After the guitar solo in a Blues Rock feeling, Sass takes over with the Piano in a more Jazzy way then back to the theme and out by the interlude unison with Bass, Electric Guitar and Bass Recorder on a counterpoint by Organ and Drums.

4) Italian Irish
A ballad turning into a kind of tarantella.
Everything starts with the Electric Guitar solo on a lively theme then followed by the Alto Recorder then Bas, Piano and Percussion, moving on to the solo part of the Alto Recorder and Piano fills the tune ends full of life and in a positive mood.

5) Secondo Tempo
Another tune from 1973 picturing the sunrise in a peaceful atmosphere where Guitar, Bass and Drums have their original parts and Eva plays the original score for the flute on the Alto Recorder, on first melody, then she changes to Wind Controller using the sound of French Horn from the original score.
Sass changes on Keyboards between Strings, Horns harmony and Flute counterpoint to Eva's French Horn lines.

6) Terzo / Quarto Tempo
More music from the 1973 production, starting with a wild Electric Guitar impersonating the aggressor spoiling the peaceful atmosphere of the sunrise bringing people back to war and its meaningless aggression.
The tune continues with a short vocal part where the lyrics let you think about your part in the human life.
The tune continues with great contrast of peace and war and frustration created by the instruments.
The first lovely solo on the Alto Recorder is raped by the Electric Guitar, and then followed by a lot of action and stress created by time changes and counterpoint between the instruments.
Everything turns in a Church like situation where the Organ (Sass) plays a Prelude at first solo then with Bass, Drums and Bas Flute on a second line, while we feel the frustration and aggression pictured by the screaming of the Electric Guitar sounding out of the Church and getting closer.

7) Rock Barock
Is a continuation of the the Prelude taken over by the aggressor here as the Electric Guitar (Enrico) that somehow meets the sweetness of the Bass Recorder (Eva) and in their playing together, ending the concert, we feel however hope of understanding between people of different outcome.

8) Outro July the 12th 2003, from a private DVD recording by Valentino Flesca, is the ending of the concert of the day before the recording. The sound quality is bad due to recording done by video camera microphone, anyway it is interesting to feel the spirit at this concert of reunion 30 years after and the presentation of the band on a groove heading to the ending of the primo tempo, this is as well a unique document.